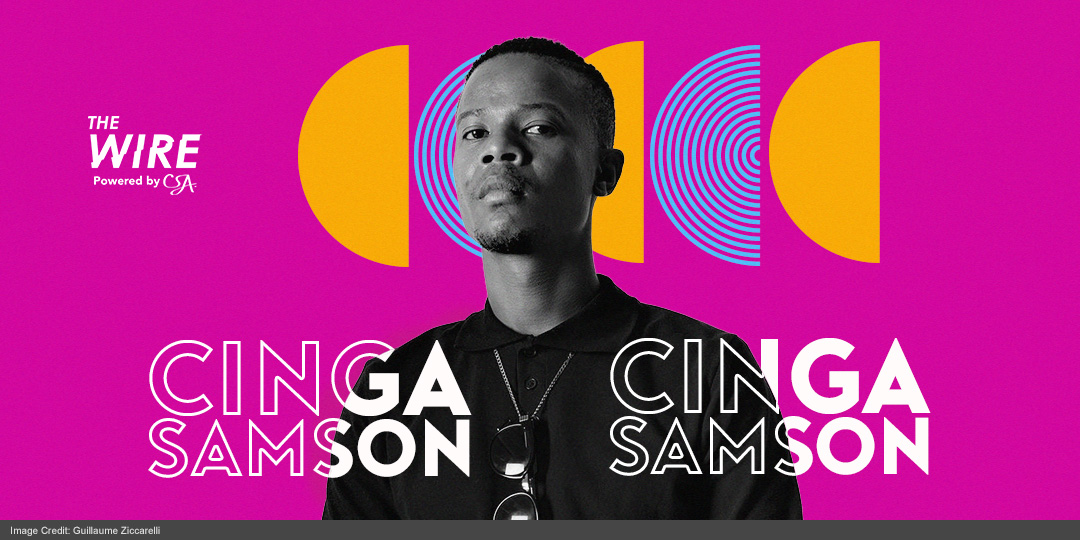 The unbearable Blackness of Cinga Samson

by Rob Greeff | May 8, 2022 | Art, Creatives On The Rise, CSA Celebrates, Culture, Entertainment, Lifestyle, Talent, The Wire, We Love Africa

Cape Town-based visual artist Cinca Samson is trailblazing globally. His rise has been swift, his talent obvious and gargantuan. His works are arresting. They stop you dead in your tracks, demanding attention and engagement but not in a shocking way. Rather, his paintings occupy the space of genius; an intellectual narrative caught between technical execution, the imagination and danger. In light of Africa Day, THE WIRE celebrates this extraordinary African talent.

Raised in the Eastern Cape village of Ethembeni, daily life has a significant influence on Samson’s art today.  In an Ocula Conversation with writer Jareh Das, Samson explains how he “grew up witnessing rituals and cultural codes that some might view as dark” but which are part of the spirituality of where he is from, that he now seeks to represent. These formative experiences are like hauntings, secret with knowledge and power for good or evil, and pervade his work.

What Samson articulates in his work

Samson’s paintings explore the complex relationship between contemporary life, traditions, globalisation, and representation. In his nuanced exploration of these themes, Samson’s characteristically sombre and brooding works drift between contemporary realism and fantasy.

Excluded financially from art schools, Samson embarked on his career and education as many artists of colour in South Africa do, informally, with curiosity and dash of audacity. In 2006 he wandered into Isibane Creative Arts, an artist studio in Cape Town run by Luthando Laphuwano, Xolile Mtakatya, and Gerald Tabata. For the next three years, Samson received artistic training by working under their guidance and in 2008 went on to study at the Stellenbosch Academy of Design and Photography.

Samson quickly settled on oil painting after dabbling texturally with sculpture in various mediums. Many of his early works portrayed flowers inspired, perhaps, by the hedge of cannas planted by his mother along the fence of their house from his childhood.

Today Samson’s main body of works take the form of portraits serving a deluge of references. In works such as Ivory IV and V (both 2018), a black male figure, dressed in a patterned and white silk jacket stands before a sinister, mystical, rocky seascape. Each figure’s eyes have been painted without pupils, denying the viewer a comprehensible gaze. The statuesque pose of each figure and textile richness of their adornments echo some of the authority and autonomy indicative of paintings of the Renaissance, while the otherworldliness of the surrounding landscapes evoke a sense of dark spirituality. Both figures appear to emerge from the water, recalling the mythical water spirit, Mami Wata (‘Mother Water’). Items of luxury and fashion reappear in Samson’s portraits as objects of pride and desire, such as the red converse trainers slung over the left shoulder of the figure in Ivory IV.

An exploration of private things

Rather than focus on identity politics, Samson has repeated that his work explores identity from a personal perspective. “I am a young black African man who is painting himself,” he says.

Departing from his own image, Samson manipulates his paintings to represent “plurality through popular signs drawn from dress codes such as gold chains, Nike and Converse trainers”, through which he celebrates the beauty of youth and what it means to be a young African man with necessary accoutrements required by the times.

Samson’s process typically involves sketches followed by photoshoots, with the artist completing the final oil painting relatively faithfully from the photographs—a recent development from his earlier practice, which involved using himself as a model. As his practice has grown, Samson has in some scenarios, initiated photoshoots with many models, as seen in Inyongo 3 (2019).

In a conversation with Amanda Gluibizzi for the Brooklyn Rail he says: “Before I start a project, I have a sensation that leads me—something that I seem to have noticed through my life experiences or things that I’m observing. This feeling gives me something that I end up investigating more in thought. I use my own experiences, but I also look at how other people are having conversations about it. What I am saying in the show is the result of these long conversations to get to the centre of what I want to say.”

With his first solo exhibition, Rusting Iron, held in 2011 at AVA Gallery in Cape Town, Samson has quickly risen to international attention. The artist has participated in several exhibitions, artist residencies, and workshops outside of Cape Town, including the collaborative Popty bach programme in the small Welsh village of Llanfihangel-ar-arth. In 2017 Samson was a recipient of the Tollman Award for the Visual Arts and featured in the Armoury show the following year. In 2020, Samson’s solo show, Amadoda Akafani, Afana Ngeentshebe Zodwav (men are different, though they look alike) at Perrotin in New York marked the artist’s first solo exhibition with a gallery in the United States, and also his first outside of Cape Town.

The importance of his work

Samson’s portraits are so potent that, as he recently told the New York Times, “If ever you get too close, you start to approach danger.” Sometimes, the works make viewers feel as though they’ve witnessed something they weren’t meant to see. The dim, eerie palette of Ibhungane 9 (2020), and the subject’s gleaming eyes, can create a feeling like the unease generated by a horror movie scene.

Though the artist has never intended to create self-portraits, he admitted that he has indeed used himself as a model. This approach allows Samson to avoid fetishizing the people he represents and (as he told the Times) “feeding into Western fantasies about Africa.” There’s always an implicit power imbalance between artist and subject, which Samson can diminish by incorporating his own visage into his work.

Samson also celebrates his subjects as he references the contemporary fashion he sees around him in South Africa. Stylish and elegant, his characters wear such clothing as a pink draping, a gold vest, a patterned Louis Vuitton jacket, a Tommy Hilfiger sweater, and an off-the-shoulder robe. “I wanted to create works that are definitely African, and you know it when you see it,” said Samson. “But I wanted to create works that also reinforced our positive aspects of our culture and reflect excellence and the incredibleness of African people.”

His powerful group portraits Inyongo 1, 2, and 3 which feature the Cecil John Rhodes Memorial on Devil’s Peak in Cape Town, the landmark which commemorates the eponymous British imperialist and colonizer, Samson began to reclaim the monument’s narrative for the city’s non-white community.

Such problems of representation and power, of course, transcend the art world, and Samson believes that issues of race and equity are particularly important right now. He noted that critics themselves have failed to acknowledge artists of African descent for far too long and must open the gates to previously unappreciated talent. He’s dubious of using the word “Black” as a descriptor, due to its slippery, politicized, and variable meanings. And yet, it is his articulate understanding of blackness that is so riveting.