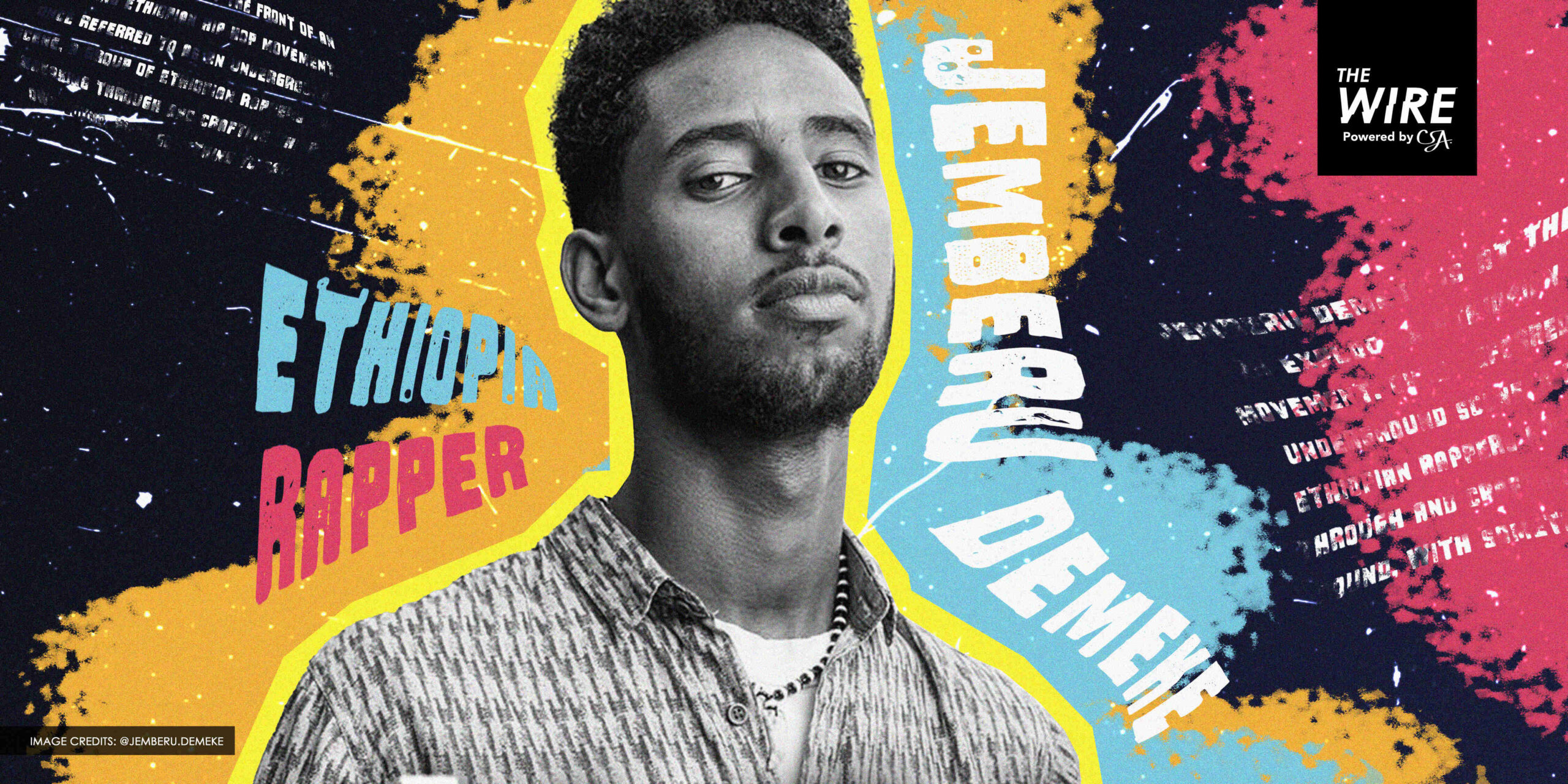 Jemberu Demeke and the sound of Ethiopian Hip Hop.

Jemberu Demeke is at the front of an exploding Ethiopian Hip Hop movement. Once referred to as an underground scene, a group of Ethiopian rappers are breaking through and crafting their own sound, with something to say.

Driving the future of Ethiopian hip hop, with access to a cultural heritage going back 1000s of years, their soundscapes are deeply influenced by a rich tradition of melodies and instruments that effortlessly come together with digital beats. Jemberu himself declares: “I try to find the gap between the old and the new, the traditional and the modern, and I grow my sound right there. In the gap.” His debut album in fact features Ethiopian musician and arranger Mulatu Astatke, a living legend considered the father of “Ethio-jazz”, a revolutionary fusion of traditional Ethiopian music with American jazz, funk, and soul. Jemberu taps into this dynamic, along with inner awareness and youthful optimism, to create something altogether fresh, becoming one of the new faces of African Heritage.

In an exclusive interview, The Wire speaks to the artist who recently executed 10 epic live shows at 10 different venues, in one night.

The Wire: Where and when were you born?

Jemberu Demeke: I was born in Addis Ababa, Ethiopia in a local area called ‘Bela’ in 2000.

TW: Is your family musical?

JD: Despite my musical career, most of my family is non-musical and actually don’t like music so it was a struggle for me being a musician at first.

TW: What musical influencers did you have as a child?

JD: I wasn’t exposed to much music as child for various reasons, however when I was 11, I was introduced to Hip-hop MCs like DMX and Tupac Shakur. They ignited my love for Hip Hop, more so than any other genre.

TW: How and when did you get into Hip Hop?

JD: I have been listening to Hip Hop music since I was a kid, and grew fond of the culture and sub genres that emerged from it, especially Trap music. So, in 2015, when I was in the 10th grade, I started writing rap lyrics for fun. Later in 2016 I discovered production software called FL studio, and started making beats. Armed with a ton of beats I began laying down some of the lyrics and slowly, step by step, got into producing music.

JD: Currently I find myself very inspired by conscious artists such as Kendrick Lamar and J. Cole. From a commercial perspective I like Drake.

TW: What line from a Hip Hop track do wish you wrote?

JD: It’s hard to choose that one single line to be honest, but I do wish I could write poetry-based lyrics like Kendrick Lamar.

TW: As an artist, what stories are you interested in telling?

JD: I love talking about conscious topics like authentic youthful life experiences and emotionally cathartic breakthroughs. I also enjoy creating fantasy based stories in a world that I imagine.

TW: What is the Hip Hop scene like in Ethiopia?

JD: It’s currently at its infancy but flexing its limbs and growing. There is a whole lot to be done and a lot of content to be made. Rappers are still seen stereotypically in a negative way most of the time but I do believe these things are changing through our generation and I’m hoping that Hip Hop reach and effect a much wider audience in the near future.

TW: How important is it for you to rap in Amaric?

JD: In my early days of rapping, I used to rap in English. The transition itself was actually tough for me but I realized that the only way I can really reach my audience is through Amharic.  I have learned that we have so much more culture than the language itself and so much to express to our own people, and people around the world, so it is very important to me to stay true to my roots. That doesn’t mean I’m confined to only make music in Amharic and I endeavour to incorporate more languages and cultures into my music.

TW: What elements of your cultural heritage you bring to your music?

JD: As Ethiopians, we have a diverse culture and a whole lot of what we could do goes unexplored. This is part of my mission. I personally incorporate elements such as Ethiopian musical scales – such as Tizita, Ambassel, Bati and Anchi Hoye – in my musical melody most of the time. I also use Ethiopian genres like ChigChiga as a backbone for some tracks while combining them with modern international sounds. I love incorporating unique Ethiopian instruments such as the Kirar and Masinko in the production of my tracks.

TW: Are there any African hip hop artists you would like to collaborate with?

JD: Yes, I would love to collaborate with Davido, Burna Boy and WizKid amongst many others.

TW: How did you come to work with the legendary Mulatu Astatke?

JD: During the making of my debut Album, my producer, Laeke, came across a track that Mulatu Astatke had made 50 years ago and ended up sampling it. Two years into the making of the track, my management and I decided to get the copyright and blessing from the legend himself. Surprisingly, Mulatu Astatke loved what we made so much that he extended his hand to further support us and ended up working with us . We’ve had a very good relationship since and he features in the video too.

JD: The process of working with Mulatu Astatke was both exciting and stressful because of the opportunity being very rare, and the stakes being very high. However it was amazing to pull through and deliver. We did a show together with a band at the renowned African Jazz Village in Addis Ababa. I later understood what it meant to truly respect other musicians. This was what Mulatu Astatke gave us and I’m forever grateful for that.

TW: What is your new album about?

JD: My debut album, titled “Jemberu Demeke”, is a conscious, varied Hip Hop-based album which also consists of many other genres such as Rock, Ethnic and Tribal sounds. It also incorporates samples used from old classics. The concept is about the different hardships we face in life at various times, overcoming them and living through them as well as having fun and being youthful and understanding life from different perspectives. Finally, it was about introducing the world to me as an Artist and all the things I am capable of doing.