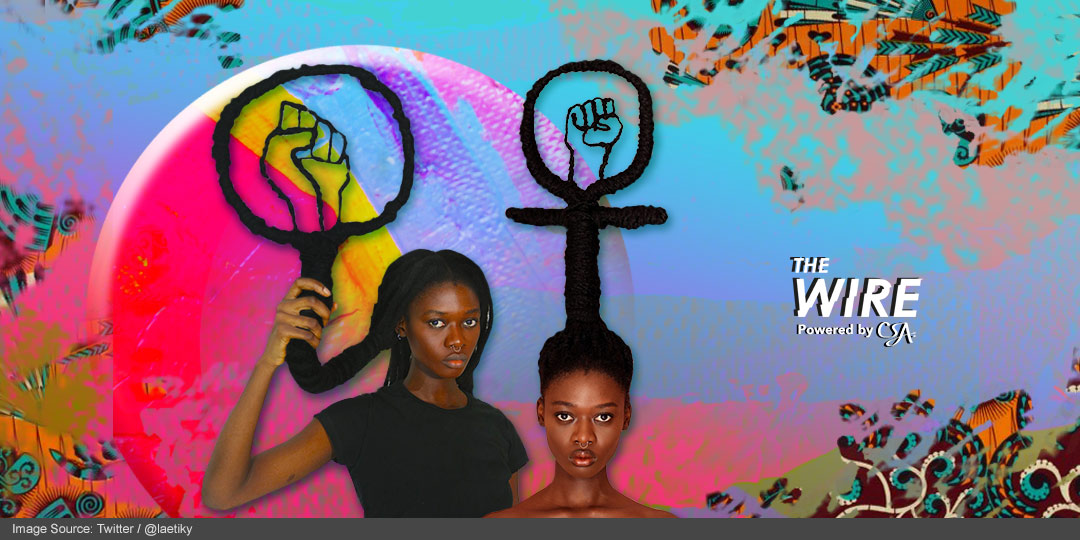 Laetitia Ky’s ‘’Love and Justice’’, more than a memoire.

Artist, actress and Afro-feminist from the Ivory Coast, Laetitia Ky, is taking a stand against societal injustices by fighting the oppressor and tackling taboos with her weapon of choice – her hair.

The 25-year-old’s art-making process is located somewhere between a discovery of photographs of precolonial African women wearing natural hair, and an incident back in 2012 where she had a bad experience with over-tight braids.

Indeed, it was her formative childhood memories in the Ivory Coast – where the norm for women was to straighten their hair and then seek solutions to heal and grow back hair as fast as possible – that galvanised Laetitia to join the ‘’natural community’’, devoted to African hair empowerment.

The need to shatter the centuries-old societal and Westernised stigmas embedded in natural African hair particularly appealed to her.

As her relationship with her hair changed, Laetitia went back to her roots, so to speak, developing a new sense of pride and passion for her heritage. Inspired by the sculptural nature of African hair, Laetitia experimented with her dreads, adding wire, wool, needle, and thread. Today, she uses her hair as a socio-political prop to spark debate on gender-based violence, equality, sexism, the patriarchy, and police violence.

During the Black Lives Matter movement, the artist caused a stir on Instagram after sharing a “Black Power fist”, created from her own dreads and extensions. She even created a body hairpiece to raise awareness for female genital mutilation in Africa.

In the process, Laetitia has garnered millions of views and followers with her gravity-defying hair sculptures. They have colonized Instagram, YouTube, and Twitter. Accolades and respect for her work have come quickly.

In 2019, Laetitia won the prestigious international model and digital creator competition, Elite Model Look. She was recognized by Paper Magazine as one of the top “100 People Taking Over 2019” and was voted one of the 35 most influential young people in the French-speaking world. After attaining global recognition, Laetitia’s work has been featured in Vogue, Vice, BBC News, Allure, Insider and Bazaar while she has collaborated with internationally renowned designers such as Marc Jacobs and Giuseppe Zanotti.

After graduating with a degree in Business Administration, Laetitia decided to pursue art full-time. She exudes creativity and her work has expanded beyond hair sculptures to also include dancing, painting, drawing, designing, and acting. She was cast in the award-winning film, “Night of the Kings”, which also became Ivory Coast’s entry into the Oscar Awards in 2020.

Her latest project – an epic memoir, art book, and feminist manifesto called ‘’Love and Justice’’ – hits the shelves in April 2022. In the book, Laetitia weaves her Ivory Coast childhood, strong family ties, journey to self-love and her African roots into 100 never-before-seen images showcasing a vision of African beauty grounded in pre-colonial aesthetic traditions, a commitment to body-positivity and gender equality.

Her book transcends the digital space into the physical and Laetitia is working towards presenting her work in art galleries as the demand for her prints increase.

Laetitia’s talent is a vivid, visual aesthetic, both charming and engaging. But the intellect behind the clever images denotes the perfect balance between being political and playful. Her’s is a refreshing take on age-old injustices, educational to a generation born in a digital era and respectful to one that came before.