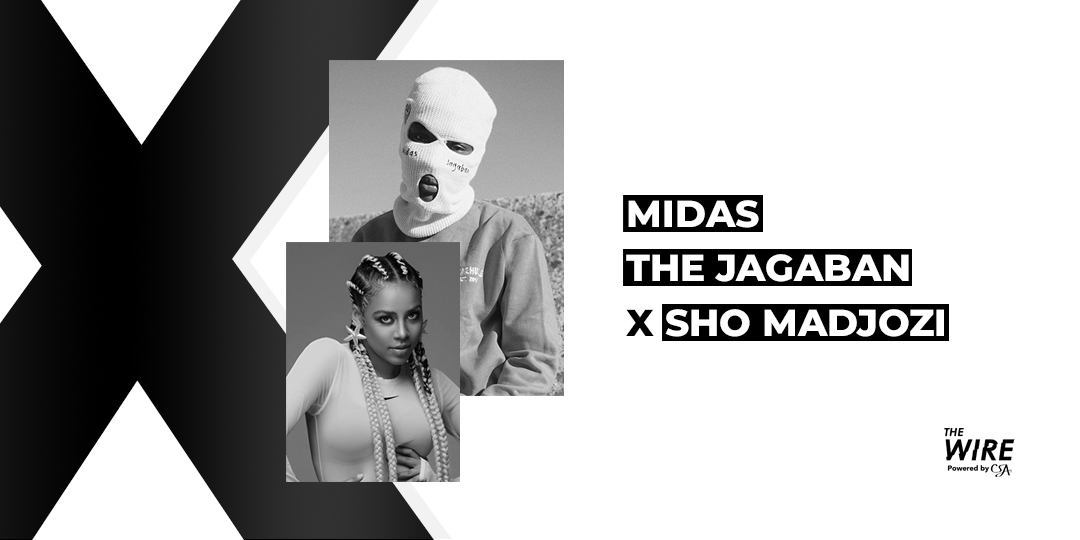 The anonymous breakthrough of Midas the Jagaban and a power collab with Sho Madjozi.

In the era of personal branding and reality TV, the global audience demands relatability, utter transparency, and vulnerability. It would seem utterly bizarre, then, that one of Afribeats’ breakout stars would choose to exist behind the mask of anonymity. Rolling in hits, subverting the notions of being a female pop star, 20 year old Midas the Jagaban drops rhymes like a machine-gun. With all the swagger of a Kanye, and evidently the talent too, Midas is imminently iconic.

“I knew if I was ever to do this, I would have to hide my face,” says the 20-year-old masked Afrobeats star. Masks in Yoruba culture also represent an ancestor, serving as a conduit between the wearer and the ancestor. Midas deftly handles this mythology in the music video for “Cloud 9”, where she calls upon Lagbaja, a Nigerian Afrobeat musician, singer-songwriter and percussionist, widely known for his signature use of masks. It’s a meta-moment of traditional practice integrated into the search for self-identity & reflection. This is as post-post-modern as it gets and leaves much to unpack.

“Midas is my second persona. When I am Midas, I’m a different person entirely. And everything I touch kind of turns to gold, so I related that to my music,” says the elusive British-Nigerian artist.

Midas simultaneously serves up the grand hip-hop aesthetic of conspicuous wealth and success as identified in a line to one of her songs – “E mi Midas I be Jagaban” – which accounts for the Jagaban (“boss of bosses”) bit. But her reasoning is clear. “I’m at the beginning stages of my career. I’m simply introducing myself as Midas the Jagaban and I want people to come party with me, so my music is very representative of my vibe and my intentions”, although she also feels the alias is “a protection thing”.

Exploding out of South London’s Lambeth district, Midas the Jagaban made her debut in the summer of 2020, releasing the infectious Afrobeat anthem “Come We Bill Ehh”. It generated a tsunami of streams and this mix of U.K. rap, electronic styles and African party sensibilities was an instant underground hit. She then dropped her debut EP “Midas Touch”, a summer-drenched collection of Afrobeats anthems, including the lavish production work of Nigerian producers Rexxie, Zino Milly, and AoD.

The Collab with Sho Madjozi

“Paigons” is the sixth track on Midas’ debut EP. The focal point of the song is the exercise of caution in our relationship with others to avoid being snaked, especially when our fame, talent and money attracts attention.

To reinforce the point, Sho Madjozi sings: “A Paigon is a fake one, he’s a new one acting like a day one… A Paigon is a hater, a human acting like a snake, f**k all the Paigons in life”. The video showcases both artists and their supporters, styled up in high fashion, taking over the streets of Lagos, Nigeria. It’s a dazzling mix of contemporary street culture & fashion with a large dose of mythology thrown in for good measure.